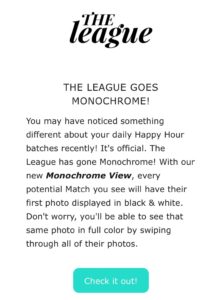 The League has described “Monochrome” as a result of A/B testing to help users get more matches. However, it’s laughably obvious that the feature is just a hasty attempt to curve the superficial nature of its user base. Which, by the way, it originally welcomed with open arms.

For those of you who don’t know, The League is a hilariously pretentious dating app created by Amanda Bradford, a former employee at both Google and Salesforce who attended Stanford’s Graduate School of Business.

You have to apply to be able to use it, and wait list times can range from days to weeks (or never). Unlike other dating apps that give you the option to list your education and employment, The League requires them for your application to be considered at all.

And once you do submit your profile, someone (I’m guessing) goes through your qualifications to decide if you match the app’s standards or not.

How do I know?

I’m not just saying that to flex nuts (I’ve always wanted to write that), either. I think perspective and experience is pretty important when it comes to something like this.

To paraphrase famous woman-beater Chris Brown: I doesn’t make sense to hate from outside the club if you can’t even get in. With that in mind, let me quickly recap my own perspective on the app:

-I have never seen anyone on the app who didn’t attend at least a top 50 university.

-Most people worked at either tech companies or law firms.

-Those who weren’t employed full-time were attending law school or business school.

-At Stanford or UC Berkeley.

-Everyone is attractive, physically active, and well-traveled.

Now, there clearly isn’t anything wrong with someone going to a high-ranking school, having a good job, or living a generally productive life.

However, there is something to be said about the type of marketing the app uses to attract desirable users, most of which happen to check all the boxes listed above.

The slogan of the app is “Meet. Intelligently.”

Mkay, sure. But let’s dig a little deeper.

Here’s what I read when I went on the front page of The League’s website about 10 seconds ago:

“Are you told your standards are too high? Keep them that way. We’re not saying Tinder doesn’t have its uses (hello Vegas!) but why not spend your time a little more… intelligently?”

Is there anything pretentious about having high standards? Maybe, maybe not.

However, there is definitely something pompous about vilifying Tinder and Vegas (randomly) in order to assert your own status.

Especially since there isn’t anything fundamentally wrong about how Tinder operates. It gives everyone a chance to try online dating. So while there’s bound to be some stinkers here and there, generalizing an entire user population that potentially includes everyone is…unintelligent.

(…See what I did there? We try to have fun around here. Or I do. We haven’t had a guest writer in almost half a year.)

After all, most married people I know who met their spouse online actually did so using Tinder.

But wait: It’s not over. Scroll down a little bit more on the front page to reveal this gem:

“So you want to date someone who shares your education level and ambition? And maybe, just maybe, you’d like them to be in your same neighborhood, attractive enough to at least look good in black-and-white photos, with a height that meets your way-too-restrictive height preferences. Perhaps you also want them to share your religion as well. While your mother may call you picky, we call you self-aware.”

Now, most people without their heads up their ass would read this and cringe.

They might even throw in a classic “Simpsons awkward collar tug” while they’re at it:

However, there exists a small group of people so incredibly smug that they’d read something like this without batting an eye and think to themselves, “Yep, that’s me. Sign me up!”

And that’s what led to the very problem The League is trying to combat.

Obviously, this doesn’t apply to EVERYONE on the app (Hi Stacy!). There are some who just wanted to try something new if other methods weren’t working. My point is that this type of conceited branding would mostly attract like-minded individuals.

The app’s allegiance to elitism has created a user base of narcissists who think they’re too good for everyone→ even other users.

These are people who are smug to the point that they’re literally in love with themselves. As such, they inject their own self-concept into their dating preferences and refuse to consider anyone who isn’t a direct reflection of themselves.

Which is why I think the Monochrome feature was introduced. The aura of superficiality created by The League’s branding is apparently hurting its own user experience, since the app’s population is mostly comprised of shallow assholes.

Everybody is so high on themselves that they’re quick to reject any abnormality to their mental idea of desirability→ be it hair color, eye color, skin color, or even their style of dress.

As such, match rates are probably low. That’s not good for a dating app. You want people to match so you can put them on your testimonial page or whatever (think of eHarmony).

The Monochrome feature looks like a desperate attempt to crawl out of the hole The League dug itself.

One of the bolded parts of the feature’s press release was “Substance > Superficiality”.

….like, the kind of superficiality that you created yourself? Huh…

Honestly, what the hell did you expect with marketing that basically said, “Think you’re too cool for everyone? Join us!”

I would have prefer if The League just doubled-down on its fuckery. Like, more of a “Yeah, everyone’s a dick on our app. Fuck it. We did this to ourselves”.

At least that would be an acknowledgment that they need to lie in the bed they made.

But this Monochrome thing looks like they’re putting a bandaid on the gunshot wound they gave themselves.

Enough of my slamming, though: let’s see how it works!

I re-downloaded the app last night to give this ad hoc Monochrome deal a chance.

And wouldn’t you know: two matches!

Wow, maybe this thing isn’t too bad after a-…..

Darn, and the second one doesn’t have any photos of her traveling.

Who knew that a cryptic black & white photo would only delay my pretentious dissatisfaction for about 3 seconds?