Interesting start to the year, ey?

In just a few months, 2020 has become every Matrix/Sword Art Online/Ready Player One fan’s closeted fantasy: a world dominated by virtual avatars, almost entirely absent of the physical biases that pervade in-person interaction.

However, given how this adoption of technologies like Zoom was rather abrupt and somewhat forced, many are still trying to continue their prior lives as much as possible instead of grappling with the existential questions that come with an almost entirely virtual society.

I’ll spare you the existential exploration of it all today, and instead focus on some of the ways we’ve been transitioning to a virtual, pant-less world.

I’ve gathered a few of the more popular activities I’ve noticed people have been partaking in and have assigned scores to them–> less out of a need to be critical and more out of the realization that this article would be kind of boring if I wasn’t.

Although Zoom was likely created to enable pointless business meetings from afar, this is its actual optimal use.

Conversation topics are focused and dynamic, all inside jokes are fair game, and you don’t need to worry about your appearance as much.

Another fun byproduct is that it shines a light on who is actually important in your life and hopefully encourages you to be this natural and relaxed elsewhere.

Happy Hours with many acquaintances: 2/5 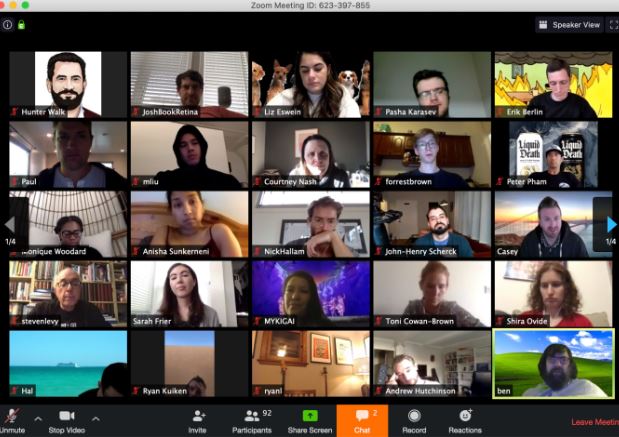 While hanging out with 30 people and being able to wear and drink what you want sounds good in theory, you’ll find that the allure wears off pretty quickly.

Unlike social gatherings IRL, where you can have multiple smaller conversations going on at once, Zoom meetings only allow for one conversation topic at a time.

Combined with the restriction of only being able to clearly hear one speaker at any given moment, you’re left with 5-6 of the loudest people dominating a (likely boring) conversation while everyone else sits and drinks in silence. 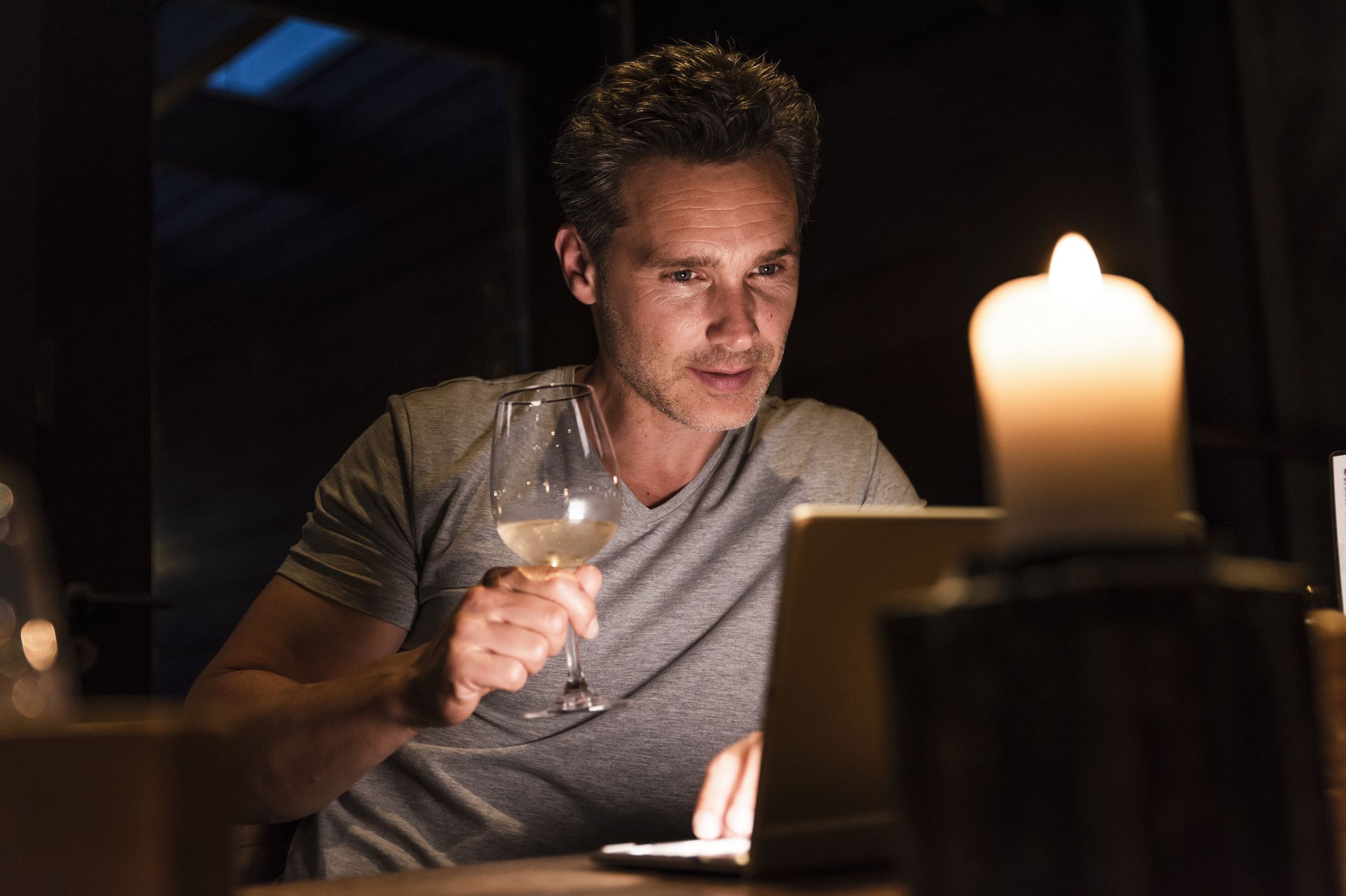 I mean…that’s basically what I do in group settings anyway, but I imagine that most people aren’t as introverted as me.

Anyway, people eventually realize that sitting quietly while pretending to enjoy the taste of Hennessy for an hour with people they don’t know too well and won’t get to know any better is pretty lame and eventually stop showing up. Since business school people love graphs, I’ll even show you what attendance to these looks like over time:


Not something that I personally partake in, but the value can’t be ignored.

While some people (like me) use working out as “alone time”, the majority of people feel more motivated and engaged when they exercise with a friend or in a group setting.

Especially since ALL time is “alone time” these days.

Zoom workout classes (either professionally or with friends) make productive use of modern technology and help people stay active during a time when it’s very easy not to.

In fact, I think some people are working out more now than they did before COVID.

Which, of course, has drawn the attention of myopic dickheads who like to bitterly point this out as if exercising during a plague is a bad thing. 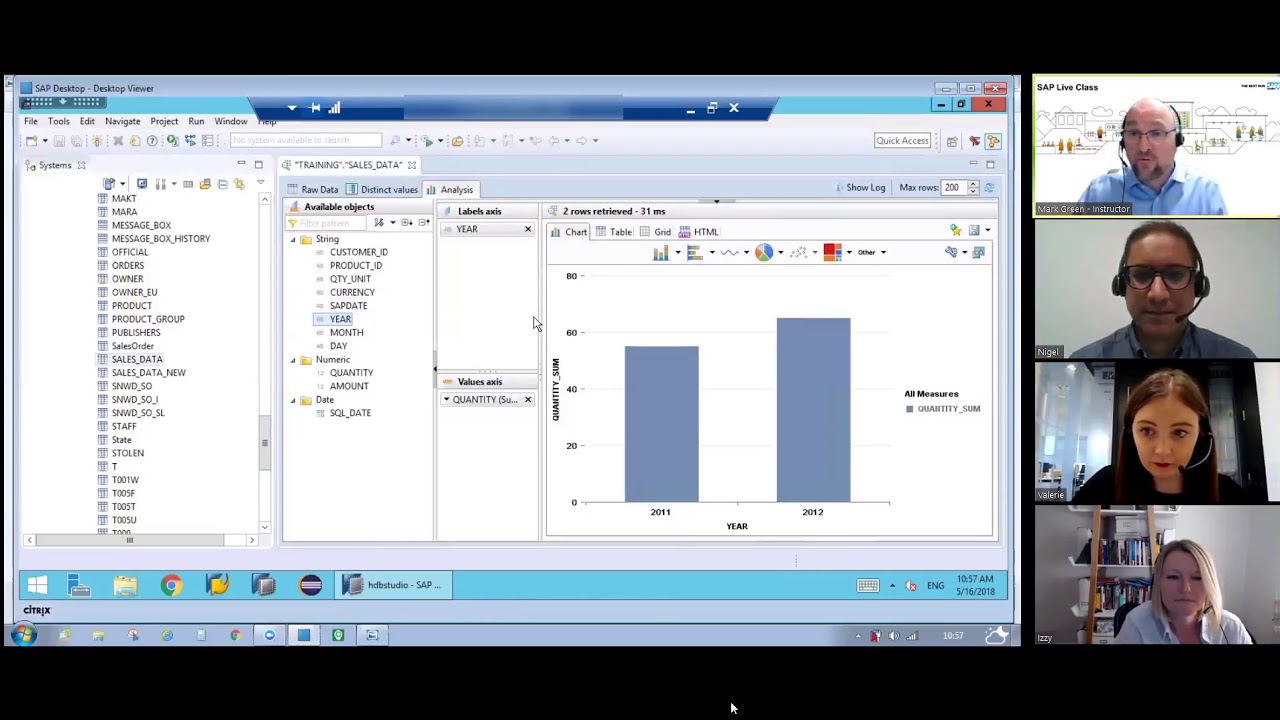 For anyone not currently enrolled in school: be grateful.

For online education evangelists who might be reading this: maybe skip this section.

While it’s not anyone’s fault and teachers truly are trying their best, the transition to Zoom classes might be my least favorite part of this situation.

I was never someone who would roll out of bed 10 minutes before class and show up to class in pajamas during undergrad.

And now I understand why. 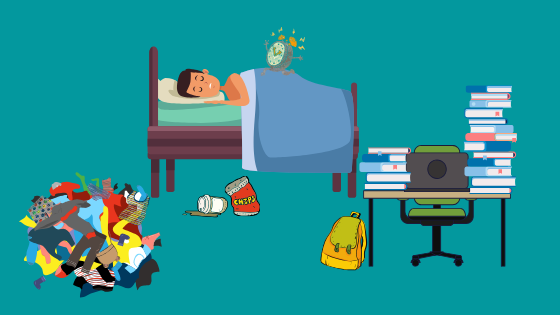 Staring at a screen at the exact same neck angle, in the same room I woke up in, and in the same clothes I went to sleep in has completely destroyed my already goldfish-like attention span.

One of my MBA classes yesterday was about Behavioral Psychology: which is, literally, my favorite thing to talk about ever.

And yet I found myself spending half the class playing Tetris.

I have such a newfound appreciation for walking to and between classes, wearing pants, and being able to move my gaze around the classroom freely.

Now I’m in the shorts I just had night sweats in while straining my eyes staring at a computer screen at an angle that’s bad for my neck. 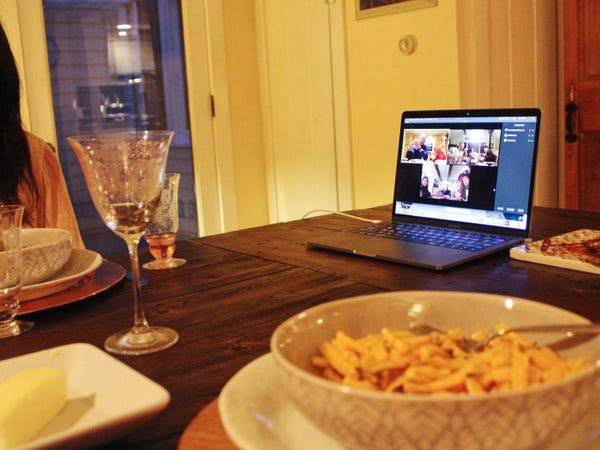 This one is super cute.

I think it shows genuine consideration and affection towards someone if you’re willing to eat at the same exact time as they are.

Sharing a meal is a universal platform for connecting with people, and this is a good way to continue doing so.

It also gives you some insight on what that person likes to eat privately: are they a master chef who made their own beef stew? Are they a manchild who still eats Hot Pockets for dinner? Or are they a likely cereal killer who eats plain hamburgers and french fries with no dipping sauce? 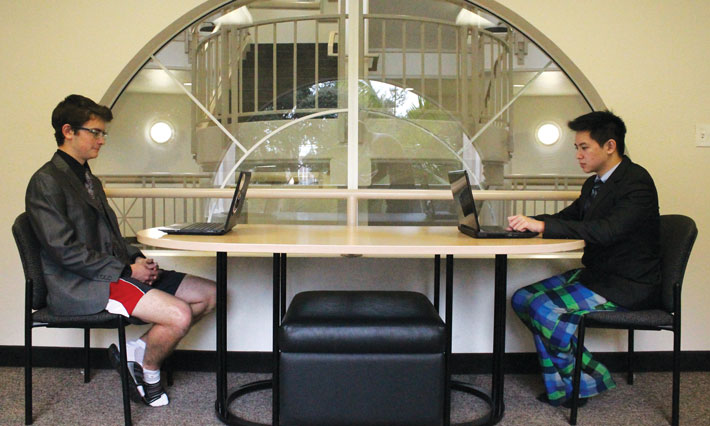 I’m split on this, but for boring reasons so I’ll be brief.

The upside is that you can successfully hide nervous habits that might normally be easily spotted→ fidgeting with hands, tapping your foot, etc.

Other things you can get away with are not showering and not wearing pants. Although, I don’t recommend either of those unless your goal is to feel unprofessional and bomb the interview.

The main downside is that it’s just more difficult to formally connect with someone via webcam. Mostly because of audio reasons since the sound of your voice has a HUGE impact on what impression you make.

And I’d venture to guess that most people haven’t purchased a $40 microphone to use for a podcast that never got off the ground like I have.

…or maybe they have, with their show premise being them and their friends “just hanging out and talking” 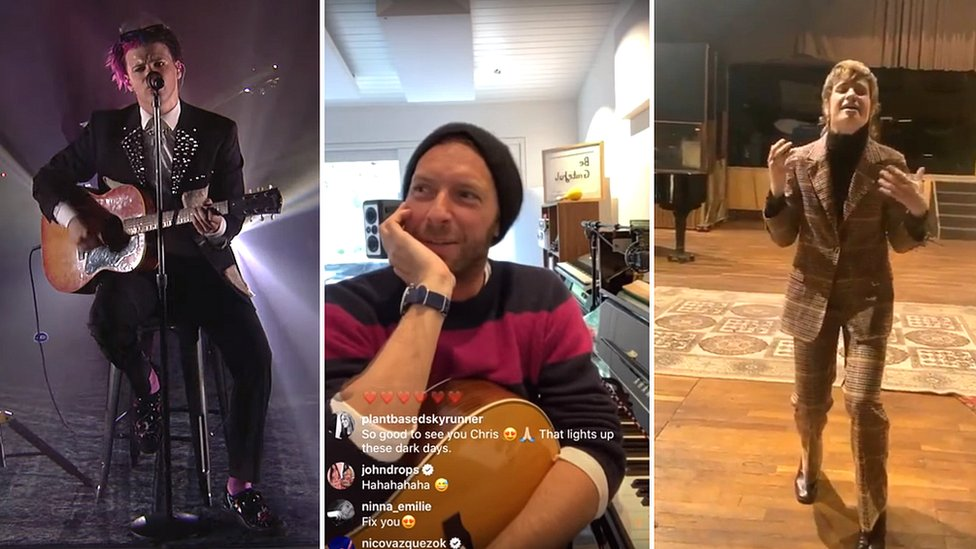 I love music, but I have to admit that I’m pretty ambivalent about live streamed performances.

I think it’s great that these artists are still trying to entertain fans despite cancelled tours and concerts.

Some acts have done a great job at this. Otoboke Beaver did an INSANE live stream that maintained the same frantic energy they usually bring to shows. Chris Martin (from Coldplay) also did a very touching live stream.

Other performances have been….less good, to put it nicely.

But still, it’s nice to see them continue to entertain instead of just disappearing and enjoying their wealth. 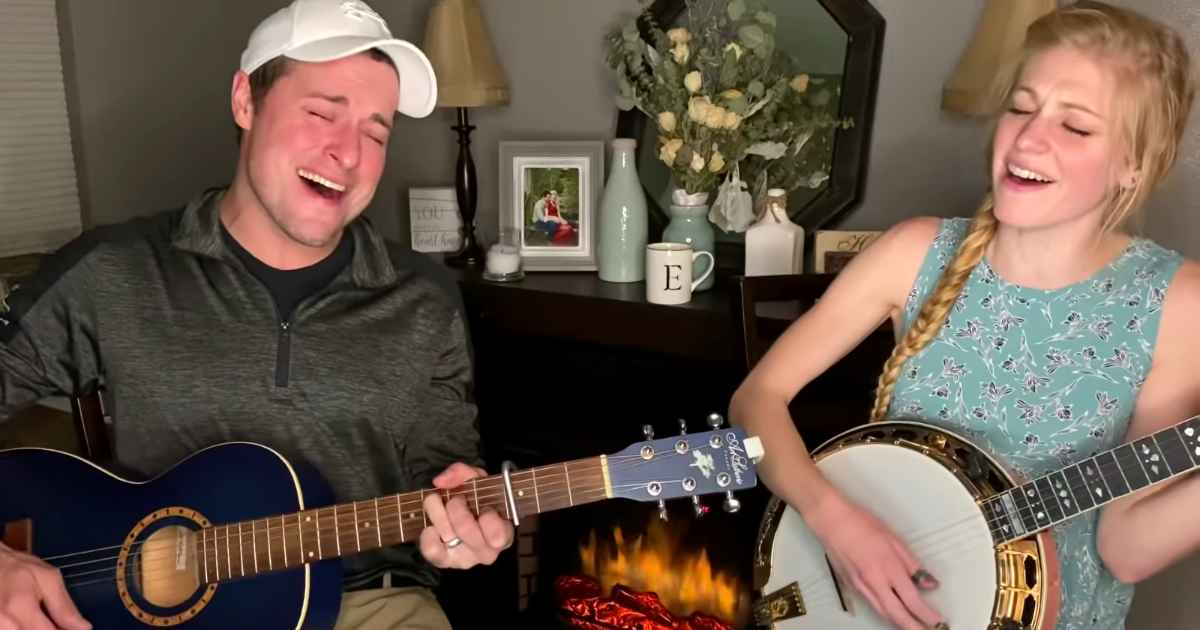 These people are usually pretty easy to avoid, since they only show up in either very targeted YouTube searches or at social gatherings they host where they “find” their ukelele/guitar “laying around” and hold you hostage during that period of time at said gathering when it’s too early to leave politely.

And now they’re free to rub their relationship that’s only held together by a common interest of being annoying in everyone’s face across all platforms.

If there are scientists working on a vaccine, I suggest someone show them yet another couple’s cover of “Girls Like You” by Maroon 5 to motivate them to find one faster.

Not using Zoom at all and being okay with it: 5/5 Despite how fun it was to write (and hopefully read?) this article, you shouldn’t feel like you’re missing out on much if you’re not doing happy hours/classes/workouts/dumb covers over Zoom.

If anything, this article probably illustrated how much you’re not missing out.

So do what you want, maybe use this time for some reflection, and please PLEASE do NOT look up the ukelele chords to “Don’t Stop Believing”.

One Reply to “Rating Popular Zoom Activities Out Of 5”