So might have heard this before, but the Millennial generation is being accused of “killing” several things that older people value.

For those who don’t know, a “Millennial” refers to the generation born between the early 80s and the early 2000s.

You know, the period time that gave the world great things like the Hummer, the Segway, Farmville, HeadOn, Star Wars Episode 1, and Mark Zuckerberg.

Okay, so maybe not everything was a homerun.

But some of  the older generation make it seem like we’ve tainted the water supply, burned the crops, and delivered a plague onto houses.

Bonus points if you got that reference.

Anyway, it takes about 12 seconds of critical thinking to come reach the conclusion that these things aren’t dying due to any malice on our part.

Rather, these things are dying because they suck and/or are no longer necessary.

With that in mind, I’m taking on the task of euthanizing some of them so we can put an end to this and focus on more important things like avocado toast and juice cleanses.

I’m playing gravedigger today, and will give these things a few parting words before putting them out of their outdated misery:

This restaurant chain certainly had its golden years.

Applebees’ heyday was when we were in high school and wanted a cheap date that was a (marginal) step up from In-N-Out.

However, time passed, incomes grew, our tastes changed, and we eventually realized how “totally not worth it” sitting 40 minutes for Wendy’s quality food was.

ESPECIALLY since we’re expected to tip at these places, too. For what? Paying 12 dollars for a burger that Burger King does better? YOU should be paying ME for showing up!

…Yes. Full of people we went to high school with that never left town.

Anyway, Applebees was there for us when we needed it, but we don’t need it anymore.

Golf has been declining for years. Not only because it’s boring (besides the Ryder Cup–look it up), but because of its association with being old, White , and rich.

Don’t be shocked, but it’s not really cool to be any of those things these days.

Make no mistake, though–> it’s boring as hell.

But the sport is apparently rather boastful about its audience demographic, with the PGA website listing some cringeworthy stats about its fans (in comparison to other sports).

“More likely to own a second or vacation home”

That sounds like I’m reading the supplies of a fucking “Build Your Own Elderly White Dude” kit. 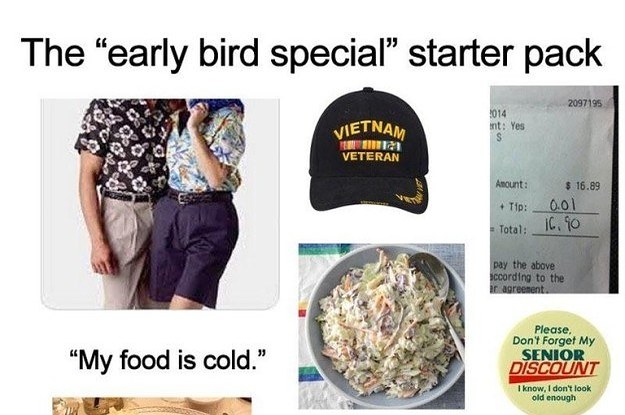 With marketing like that, it’s no wonder why the sports is struggling to attract young people.

Like, how am I supposed to get a vacation home when I can’t even buy a regular one?

Some predict that Golf will be gone within 25 years. My guess is that this prediction is based off 63% of the total fanbase almost assuredly being dead in 25 years.

We were raised by our parents to avoid buying things we don’t need.

Fabric softener is something that we literally. Absolutely. Do. Not. Need.

Most detergent these days are scented anyway, so fabric softener is already superfluous.

That’s not even mentioning that it costs damn near as much as the soap itself.

Oh, and am I supposed to worry about how cuddly and soft my clothes is?

I got this shirt at Target for $9, and these pants at Ross for $12. I knew what I was getting myself into.

Besides, if I skip buying fabric softener for 3 months then i’ll have enough for another pair of pants.

You had a nice run fooling our parents, Downy. Don’t let the coffin door hit you on the way out.

Speaking of expensive overlap, we’ll also be saying our farewells to Napkins today.

Apparently, Millennials have been opting for paper towels in lieu of napkins at the dinner table…or “dinner couch”, since who even owns a dinner table anymore?

It’s really no secret that something small and expensive is getting displaced by something larger and cheaper.

Especially since paper towels can stand up on their own. So not only would we have to buy expensive napkins, but a freaking holder to store them!

Older folks used napkins to add to a home’s decor. It was an essential part of a complete living environment.

Luckily for our generation, nobody cares about stuff like that anymore because it’s just a stupid thing to care about.

Or because we don’t own homes. I mean…do I really have to explain this one?

The place is fucking called HOOTERS, for science’s sake.

You go there to eat pretty decent wings and have attractive women flirt with you for tips.

Not really the best behaviour (I’m apparently British) to reinforce.

Since objectification is rightfully much less accepted these days, the current regular at Hooters is assumed to be a sex-deprived male with a beer belly who drives a pickup truck and hates Colin Kaepernick.

So basically the antithesis of a Millennial.

However, I don’t propose that we kill off Hooters completely. Rather, I say we reincarnate it as a place with pretty decent wings and attractive women who educate men on how to respectfully court other attractive women.

And I’ve already patented that idea, so don’t try to beat me to it.

Or I’ll sue your ass.

Harley Davidson anticipates sales to drop as Baby Boomers continue to hang up their keys.

Now, there are two main reasons for this:

Old America viewed motorcycles as a symbol of masculinity, freedom, excitement, and rebellion.

Those are all pretty cool things, but our generation doesn’t think that riding literally the most dangerous vehicle ever is necessary to attain them.

I’ll quote my college track teammate (and adrenaline junkie), Troy Hardy: “Going fast in a car is fun. Going fast on a motorcycle is scary.”

The decline of motorcycles seems to be running parallel with the whole “machismo” schtick in general getting phased out.

Being an emotionally callous statue who uses aggression to solve his/her problems isn’t all that cool anymore.

Betcha didn’t see this one coming.

As it turns out, millennial peeps aren’t too keen on “going steady” with the first person they’ve ever been attracted to and starting a 40-year marriage of moderate regret.

I know, I know–I’m clutching my pearls as I’m typing this.

But yeah, our transition into adulthood coincided with the rise of the “hookup culture”, which was made possible by things like texting, dating apps, and “Rack City” by Tyga.

The possibilities are virtually endless now, and most of us are abstaining from long-term commitments in favor of “Netflix and chill” with someone we literally met last week.

In addition to that, females in our progressive generation have put ambitions of marriage and family aside in pursuit of career advancement.

No longer is it considered odd for a woman to be unmarried at 25–which was almost unheard of in the 50s and 60s.

And not only are women more independent at work, but also in their dating lives. I think I know more women now who fit the “player” stereotype than men.

The tables have turned, fellow fuckboys. But still, equality aside, the older generation is kind of upset about how loose we are with partners.

And while they probably don’t realize it, they kind of have a point.

Sure, having many options helps us cultivate and pursue what we really want in a partner. But too many options leads to the “Paradox of Choice”, a theory that correlates a large number of choices to lower satisfaction with the eventual decision.

There’s always that sense that there’s someone “better” for you out there, which is why a lot of us are unwilling to settle down.

But hey–it saves money on shitty awkward dinner dates, allows us to proverbially taste the rainbow, and keeps us focused on getting high-paying jobs to buy a house in the same market that Baby Boomers crashed, so they can shut the fuck up if they have a problem.

….Oops—> got a little carried away there.

What I meant to say was….they can shut the fuck up if they have a problem.

I’m outta gas and time right now for a witty conclusion. The good news is that this is a 2-part post, so I still have some time to come up with one.

I’ll be on vacation for the next two weeks, and will come back right before Thanksgiving break. I’ll get to work on Part 2 once all that is done with. In the meantime, feel free to shoot me any suggestions on what I should put on Part 2.

I’m also open to guest writing, too, so if you’d like to write about your own suggestion, I’d be more than happy to have you.

Thanks again for reading, and Happy Thanksgiving!

…that is, if you’re going to celebrate the commodification of thousands of Native Americans getting slaughtered. Haha.