(Note: Every video featured in this article was written by me. But, like, duh.)

Some of you might not know, but I was a freelance script writer for WatchMojo.com last year.

It was the most exposure I’ve ever had as a writer (and probably ever will have), but I walked away from the experience with one main revelation: I don’t want to be a writer for a living.

Alright, was that hook effective? Cool.

I’m giving myself 30 minutes to recount my WatchMojo career, so let’s get to it: WatchMojo is one of the biggest Youtube channels in the entire world. Their trademark “Top 10” videos have earned them 15 million subscribers and over 10 billion total views.

They’re a fucking behemoth, and their lists span all topics imaginable–from music, to video games, to anime, to sports, to….literally everything.

What led me to join WatchMojo

My favorite G4TV show was Filter, where they did Top 10 lists of random nerd topics.

I watched the VH1 “100 Best ___ Songs” series in their entirety. These lists spanned 5 hours each, and I saw every–>one multiple times.

In middle school, I made my own Top ___ lists on my Myspace, including my Top 5 video games (Number 1 was Pokemon Gold) and my Top 5 McDonald’s menu items (Sausage Egg McMuffin).

I had a Tumblr music blog for 4 years with 3,000 or so followers, and every year I ranked my 20 favorite songs of all-time.

And, uh, you might have noticed that I do a lot of lists on this website. It’s not because the listacle format has gotten so prevalent, but because ranking things and explaining why they’re so praiseworthy is a genuine passion of mine.

It was only natural that WatchMojo captured my imagination and lead me to seek writing for them.

I’d freelanced before, but it was mostly sports writing for Newspapers and websites (including Fansided.com, get @ me).

I’d never written anything even close to a video script, but I was fresh out of college at a job I wasn’t too passionate about. I figured I had little to lose.

The application required a resume, some samples, and a small blurb about why I’d be a good fit.

I submitted the necessary materials and heard back from them rather quickly.

They liked my resume, and wanted to give me a sample topic to write a mock script for. If they liked it, I would come on as a training freelancer.

If they didn’t, then my dreams and ego would be crushed.

When I saw the mock entry I was supposed to do, I couldn’t help but smile: Top 10 Cel-Shaded Video Games– #1: The Legend of Zelda–The Wind Waker.

That’s one of my favorite games of all-time, in case you didn’t know.

I banged out the script, submitted it, and was brought on as a scriptwriter in training.

My first script went about as well as I could have hoped. The topic was:

Top 10 Movie Characters That Should Have Died (But Didn’t)

The deadline for each project was 1 month.

I finished my first one in 6 days.

When the video for my first script was released, I was filled with a sense of accomplishment.

Finally, all of my obscure pop culture knowledge was being put to use.

At long last, I had reached a wide audience that I was able to share my passion with.

With the videos I provided scripts for eclipsing 400,000 views, I felt that I had reached the mountaintop– I had finally “made it” as a writer.

While it was great to have my writing on such a big stage, it was rarely an entirely fun process.

WatchMojo’s procedure required finding at LEAST 3 different sources on the internet for whatever topic you’re doing.

So basically, you had to find 3 lists that already existed.

You then had to fill out a spreadsheet with every pick your sources listed, a brief description of why it fits the topic, and a video link to the song or video clip in question.

If one of your sources had 25 entries, you had to list every single one, provide a description, and find a corresponding video link.

If you think that’s an arduous and tedious process→ you’re correct. It took a combined 3 hours most times just to do the research.

Then you submitted the spreadsheet to the editors, who ranked the entries and sent them back to you so you could finally start writing.

Often times, I put in hours of work finding potential entries that were supported by my sources, only to have a random editor shoehorn an entry into the final ranking.

Example: In the Top 10 Anime Gunslingers list, there was a huge discrepancy between my recommendations based on research and the final ranking.

One editor decided to shove Hol Horse from JoJo’s Bizarre Adventure into the list. Hol Horse is basically a non-factor in the series, which is why he didn’t appear on ANY similar list on the internet.

One of the editors apparently had a hard-on for JoJo, though, so there he was on the finalized ranking, and I had to make it work.

On the same list, Sinon from Sword Art Online was ranked above Alucard from Hellsing.

Alucard should have been in the Top 5 at least, but he was somehow placed at Number 8→ below a side character from a shitty show. 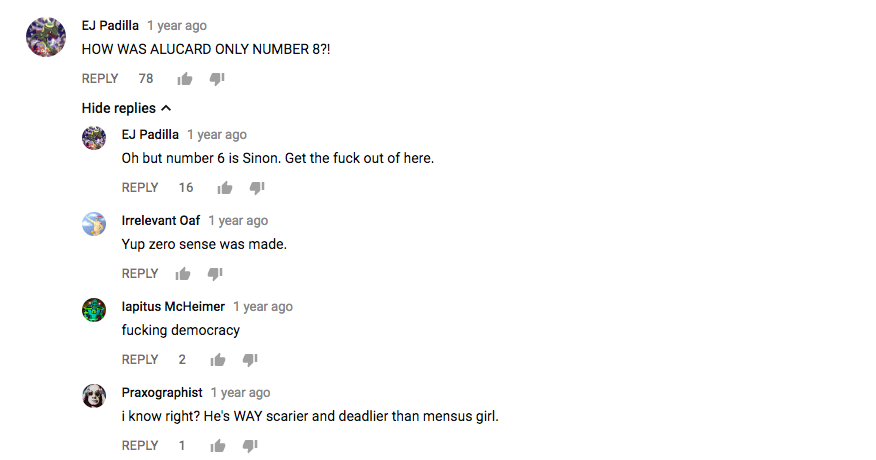 I knew this was wrong. I knew these things would piss off a lot of people, but I was just starting at this company and didn’t want to ruffle feathers. They gave me a chance at the proverbial “big time”, so I kept quiet and wrote the script.

As expected, people were livid about the Alucard thing, and I felt terrible. I felt like I was selling out because the list wasn’t really chosen by the anime community, but by a few faceless editors.

But alas, the video got over 650,000 views on Youtube, so nobody at WM cared that it alienated the hardcore anime fans.

I continued to write for WatchMojo whenever they sent out “rush” topics that interested me. These were lists that they needed done quickly in order to coincide with a new release or a holiday or whatever.

I pulled through for them big time on a few occasions, including Top 10 Things That Broke The Internet In 2016 and Top 10 Sports Moments of 2016–which I had to write in 2 days.

At that point, the only thing the editors really had against me was that I didn’t write more.

I was always praised for my writing, but started to cut it it really close with deadlines→ sometimes submitting the script 20 minutes before it was due.

It was mostly because the editor interference was stressing me out, so I lost a lot of the enthusiasm I once had for researching and writing. I knew the editors would discard my research, the fan voting, and my own input by ranking the final list however they wanted.

Eventually, one editorial change happened that I couldn’t ignore.

I was working on the script for the Top 10 Worst Rap Songs Of All-Time.

As always, I gathered a huge list of potential entries (over 40) from various sources, had descriptions for each one, and even provided Youtube links to the songs so the editors could hear them for themselves.

No way the editors could screw this one up, right?

I got the spreadsheet back and couldn’t believe the final ranking.

The editor put Brick In Yo Face by Stitches at Number 1.

It wasn’t on ANY of the 5 sources I listed.

It was never mentioned on any of the fan votes.

I’d never even fucking heard of it before.

I wasn’t going to keep quiet this time. There was no way in hell I was going to have my name tied to such an abomination of a list.

Especially since, while bad, “Brick In Yo Face” is far from the worst Rap song ever.

Like, c’mon man. How out of touch can someone be?

I sent an email to the editors, saying that I think the rankings should be revisited, given the lack of support for the Number 1 choice.

I was ignored. Three times.

With the deadline fast approaching, and given my growing reputation as a late submitter, I caved and wrote the script.

And after that, I was done.

It wasn’t fun anymore. The feeling of listing an entry and having someone go “Yes!” because you picked what they loved was substituted with a “What the fuck!?” because of idiotic rankings.

I felt like I was betraying the audience, because these lists weren’t ranked by consensus, but rather the subjective choices of a few editors.

Which normally wouldn’t be a big deal, but these subjective choices were fucking stupid and pushed everyone’s buttons.

I went dark on WM after submitting the Rap script. I ignored the rush projects, and didn’t even fill out invoices for my last few scripts.

You’d get about $30 per script, which was almost insulting considering how much work went into creating them.

Eventually, an editor reached out and said I would be asked to step down if I didn’t take on another project. He also said that if I had any issues to discuss, then he’d be open to it.

I realized that big channels like WM valued views and clicks more than quality content, and that this dedication to quantity over quality was led to some pretty stupid list topics.

With that, I told WM that I would voluntarily step down and we could mutually part ways.

I was given a survey to provide feedback on my way out. I didn’t complete it.

If I learned anything from my experience at WM, it’s that writing as a career isn’t for me.

I don’t like being told what to write about, how to write it, or when I should be done with something.

Everything is about SEO these days. That’s how websites make money. As such, they don’t care how good whatever you write is as opposed to how much you write about dim-witted topics that are widely accessible.

If writing as a career requires me to dumb down what I say to make things more snappy and fast, then that’s not a life I want to live.

Writing is a lifelong hobby of mine. It’s a therapeutic way for me to try and make people laugh or at least smile by expressing my thoughts and interests.

And if focusing on this website and writing to an audience of 2,000 instead of 10 million is the only way to be true to myself, then so be it.

It’s a tough pill to swallow knowing that I’ll probably never be the influential blogger I once aspired to be, but that’s okay.

WatchMojo was a fantastic experience, but I’m having a great time where I am now–under the fridge.

2 Replies to “Why I Left WatchMojo”