You don’t know about “Virtue Signaling”? Well, as a man, let me tell you all about it:

Virtue signaling, in short, is the use of sweeping, lofty language to signal how virtuous you are while circumventing substantive action.

Basically, you demean systems and general practices on the macro level while still subscribing to them on a micro level.

How is it different than being a hypocrite? Well, a hypocrite says to not do an action but then does it anyway. A hypocrite at least is diverting you away from something they are masking as being bad, and then choosing to do it against their own words.

A VS (virtue signaler) however, tries to shame you out of something while passively maintaining the very system they are shaming. 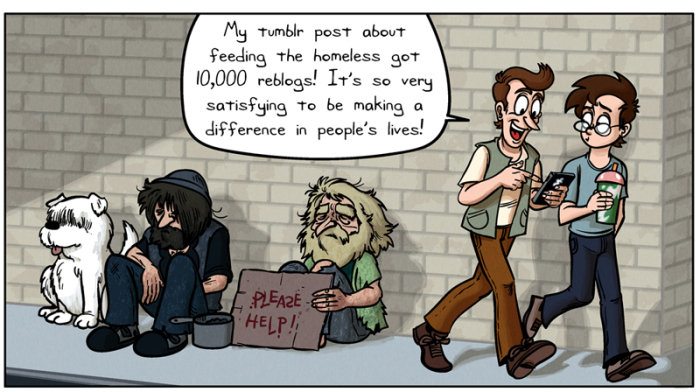 A VS is typically unaware of their VS nature because it is masked in benevolence without a change in action, hidden behind supremacy of thought without sacrifice, and guised in progressiveness while staying static.

Nothing changes for a virtue signaler besides their status updates and hashtags.

For those new to the subject, here are eight examples of virtue signaling that need to stop immediately:

Ladies… let’s have a talk.

Please do not go out of your way to talk about the over-sexualization of women and the need for equality right before reaping the full benefits of Ladies Nights and cheap club admissions.

Doing so only further solidifies the system of gender imbalance and weakens the basis of feminism–just for the opposite sex.

Moreover, the primary function of ‘ladies free before xyz’ is to virtually corral all of the ladies into one place and then charge the male species a premium for access. If you do not want to be hunted–so to speak– then stop opting into being prey. You want prayer in schools? Abortions to be illegal because the bible?

Well, would you also like the government to allow satanic churches to also teach your kids? As well as the Muslim faith to be the measure of what is allowed in co-education?

Are you okay with having to abide by the rules of Buddhism as well Atheism?

No? Then clearly this issue was never about religious ‘liberty’

Now of course no one person can dismantle a system as gargantua as the PIC.

However, every single individual can opt out of supporting it.

As Hasan Minahj said at the 2017 White House Correspondents Dinner to MSNBC:

None of us want to hear about how corrupt the justice system is just because you watched ‘Making a Murderer’.

And we damn sure don’t want to hear about the nuances of the prison industrial complex while you are still purchasing products made with virtually free prison labor.

Hmmm.. what products do you ask?

So here’s the thing: If you’re a person in a marginalized community, you are the very last person who should be marginalizing someone else.

So if you’re LGBT and fighting for people to treat you equally, then why does your Grindr/ account say “No Blacks, or Asians”?.

If you’re Asian, and stating that you’ve been oppressed by systemic imbalance, then don’t turn to all of the other minority groups and tell them that they are less than Whites.

If you’re a straight Black male, then you should be fighting for equality for Black queers as well as yourself, right?

Wanna know what’s more annoying than waiting in line at McDonalds? Having your virtue signaling-ass friend tell you the entire time how bad it is for you right before he walks up and orders hella McChickens.

It would be hypocritical if it stopped there. But you know it doesn’t.

He probably then discusses very publicly about how we should all be health conscious and protest the government’s subsidization of corn which leads to increased cheap fast food products and thereby childhood obesity.

If he was actively decreasing his sodium intake and trying to cut back on the cigs and was giving up alcohol, then he would be a bit more justified.

However, if that were true then instead of being a health and wellness VS then he would just be passively body-shaming. Tsk tsk. This signal of virtue low-key might get on my nerves more than any of the other ones.

People walk around talking about being ‘body-positive’ and that big people “better werq”.

This is true, people should love their own bodies regardless of what stage of the journey they’re in.

How many women do you know that need/want/require a man to be at least two inches taller than she is in heels?

Okay, so does that mean she’s taking requests as well? If so, then how about being 5’9, who’s top of the line, with a cute face, slim waist, and a big behind?

Oh wait… are you saying relationships aren’t a made-to-order service? Oh, my bad. Sporting events are basically just people watching rich people fight each other. It’s like a direct inversion of the Roman Coliseum.

Want to know what’s really unnerving (beyond the spending habits of NFL players)? The amount of strong opinions people have for the sports industry at large.

Are you upset that the NFL, NBA, and MLB are registered nonprofits? Are you mad that Colin Kaepernick isn’t signed yet?

Are you low key heated that the NCAA has athletes working tirelessly for no money (because it’s against the rules), thereby allowing institutions run by White men to rake in millions on the backs of Black bodies –thereby making collegiate athletes a form of indentured servitude?

I’d better not run into you at a game, see you on a jumbotron, or scroll across a tweet about collegiate or professional sports.

Why? Because wistfully proclaiming the grave injustices against people of color by the NFL (N**** For Lease) conveys that you would turn your back on the league–or at least hold them accountable.

But if you are going to continue to give ratings, buy jerseys, and tickets, then don’t speak and have a seat…or several– likely in Levi’s Stadium.


Now, if you choose not to eat animal products because it is better for your diet, you don’t like eating sentient creatures, or you genuinely don’t like the taste of bacon then:

This example of virtue signaling is more for the people who wrap their vegan dogma in words like Agribusiness, rainforests, and blah blah blah.

Granted, there is something acutely noble in not partaking in a system that slaughters animals in a variety of creative and vastly inhumane ways.

However, how is that enough? Your reticence to enjoy bacon does very little to help animals.

There is a theory that one vegan diet will spare 95 animals from being bred to a life fast-tracked to the dinner table. However, this rumor takes the government out of the equation.

If for some reason there is too much of a supply, then what will happen? The farmers will not start producing less. They will merely sell the surplus to the US Gov’t to be exported to a variety of places, thus keeping the farmer, the economy, and the indulgence in meat in tact. We would need to convert the entire planet to be vegan, and then convert the animals as well.

…Or do you not have a problem feeding your cat and dog food made of other animals?

Are you purchasing meat products for your pets? Do you have leather heels or dress shoes? What about suede? If so, then you’re hella still apart of the problem (especially if you answered yes to still owning suede).

Now, I say none of this to shame vegans. I think it is wonderful.

But please, do not pass any flavor of judgement on people who eat meat when your actions of not eating meat carry with it only a nominal variance of complicity in the war on food. Either get out there and start lobbying for legislation, or chill out with your Kale crackers.

Side note: Do you know what a major contributor to deforestation is?

So although your Soy intake doesn’t kill animals directly, it is contributory to their displacement and evaporating ecosystems around the world– which leads to their death.

Ultimately, this entire piece is nothing but a ginormous, man-splaining, oversimplified, Virtue Signal.

However, I’ve chosen my battles.

Now it’s time for you to decide if you actually stand for anything ,or if your twitter fingers are more woke than you are.

If your actions and inaction have the same outcome, then you need to reevaluate your presence.

Virtue Signaling is nothing but a lazy person’s liberalism, so, if you’re not prepared to take action then don’t speak.

Otherwise, if you’re going to talk about it then you better be about it.