Today, I’ll be reviewing one of the most complex and unnervingly relevant works of fiction that I’ve ever seen. It is a series that operates on a more philosophical and existential level than your average anime. This series, of course, is none other than Serial Experiments Lain, released in 1998 by studio Triangle Staff.

Now, before we go any further, I really want you to pay attention to that release date. Lain was released when the internet as a household communication medium was still in its relative infancy.

However, factoring in all the thematic elements and influences that we’re about to explore in a second, you’ll soon see how Serial Experiments Lain is eerily more relevant in today’s world than it has ever been.

While the event is indeed tragic, the real butt-pincher comes when several girls at Chisa’s school receive a posthumous email from her.

The email claims that she is not actually dead, but has instead left her physical body behind and has completely joined “The Wired”, a Virtual Reality world that is basically what we would recognize as The Internet.

Among the girls to receive this email is Lain, a shy and soft-spoken girl who, at the time of receiving the email, makes very little use of technology. However, Chisa’s mysterious email prompts Lain to further explore The Wired, in search of what her deceased classmate was talking about.

As Lain delves further into The Wired and learns more about its origins, she begins to have an existential exploration about what is real, what isn’t real, and to what extent does it even matter.

At the risk of spoiling anything, I’ll stop there and switch from the plot itself to how it’s presented to the audience.

Lain is a series of subtlety. Very rarely is vital information spoonfed to the viewer. Rather, important plot points are hinted at, implied, or casually glossed over. Being able to follow the story requires constant vigilance, which I think was intentional because it really drives home the show’s message of ontology. 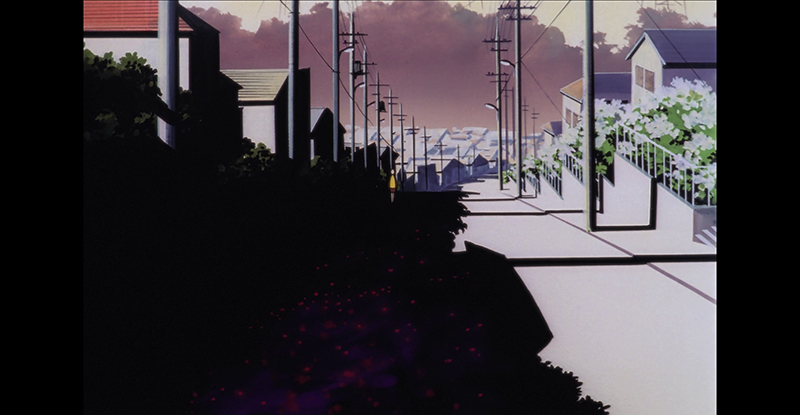 People have gone back and forth over the actual story of Lain since its release, and opinions on the matter are more variable now than ever. But most agree that the series’ plot was intentionally left ambiguous to allow the viewer to draw their own conclusion.

After all, that’s the only logical conclusion for a show that features a scene where two characters literally swap dialogue without the audience ever being notified.

….seriously, that shit was trippy.

Anyway, I prefer the explanation that there is not a definitive story for Lain. It allows us as viewers to inject our own experiences into the shows events. I typically hate works of fiction that do this, but it’s absolutely appropriate for this series.


Since the series is so short, this portion is going to be fairly straightforward.

Lain is the main character of the series, and to an extent, can be considered the only character.

The reason I say this is because most other characters only seem to exist in order to further develop Lain’s character or answer any questions that she (and, by-proxy, we) have about the world and The Wired.

Lain herself is quiet, somewhat antisocial, and has a sense of curiosity that drives the show’s events. Her relative lack of experience with The Wired makes her the perfect vehicle for the audience to learn more about The Wired and its association with the real world at the same rate as Lain.

Arisu (or “Alice”, if you watch the dub) is Lain’s closest friend (by default). While her role in the beginning of the show is simply to try and get Lain to be more social, she becomes much more vital to the show as the plot progresses.

As Lain becomes more entrenched in The Wired, Arisu helps ground the audience in reality. She eventually becomes the character we rely on to question and distinguish what is real and what isn’t.

Early in the story, we become introduced to a group of organized hackers known as “The Knights”. Like most things in this series, their role is mostly indirect, as we’re never exposed directly to the members as much as we’re exposed to the impact of their actions.

The best part about Lain’s soundtrack is that there basically isn’t one.

Okay, that’s not entirely true, but hear me out. While there is an official OST for the show that’s even been released as a CD, the best uses of sound in this series are during moments of absolute silence.

After all, a show this dense and potentially disorienting doesn’t need to distract the audience any more than it needs to with gratuitous use of music. 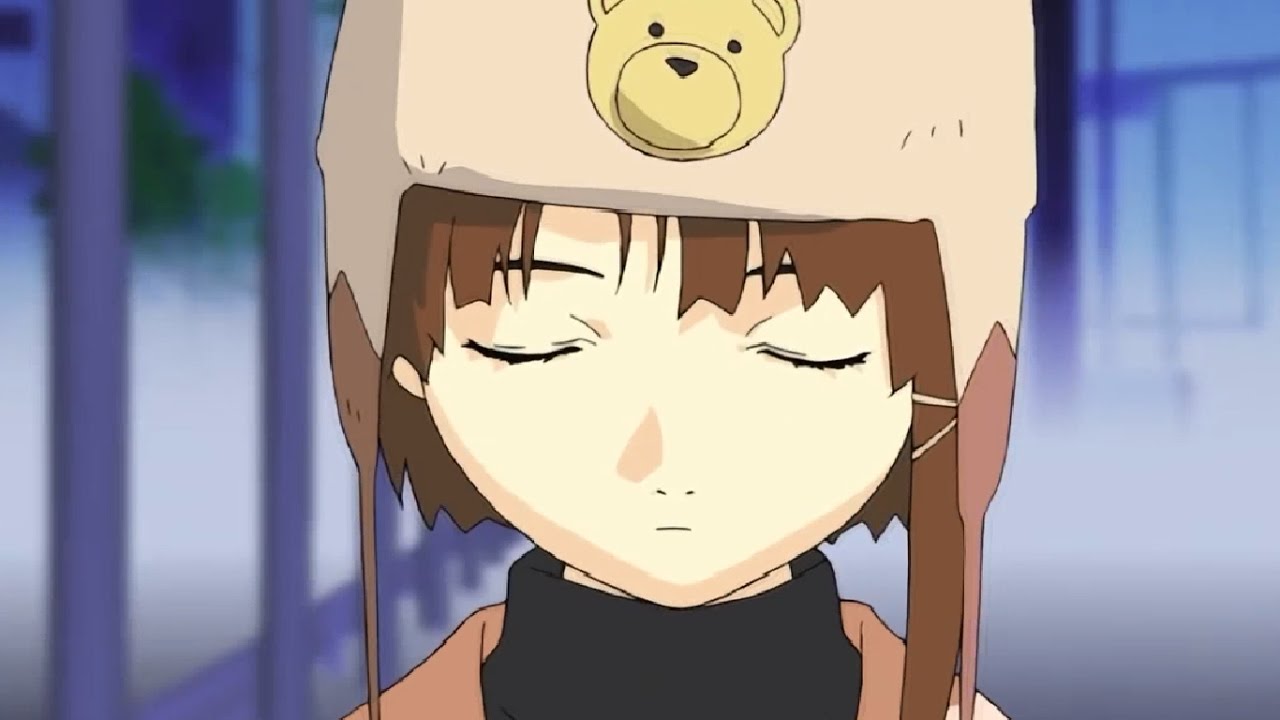 There is a small pool of recurring sounds, though, that the show uses to set tonal expectations or to tip the audience off to whether the setting is The Wired or the real world.

In terms of actual songs, the main standout in Lain is the opening “Duvet”, by the British band Bôa. It was quite unconventional for a Japanese show to feature an English opening song, but it falls right in line with what the series is: unconventional.

“Duvet” actually made my Top 25 Anime Openings list, for anyone who cares.

Keep in mind that this show is almost 20 years old now.

Given that, the animation holds up pretty well. I can only imagine how good it looked relative to everything else at the time of its release.

The use of shadows is very clever in this series, having static shapes in recurring shots. By that, I mean that certain settings always have the same shadow patterns. I don’t quite understand why they are, but it definitely creates and unsettling ambiance. 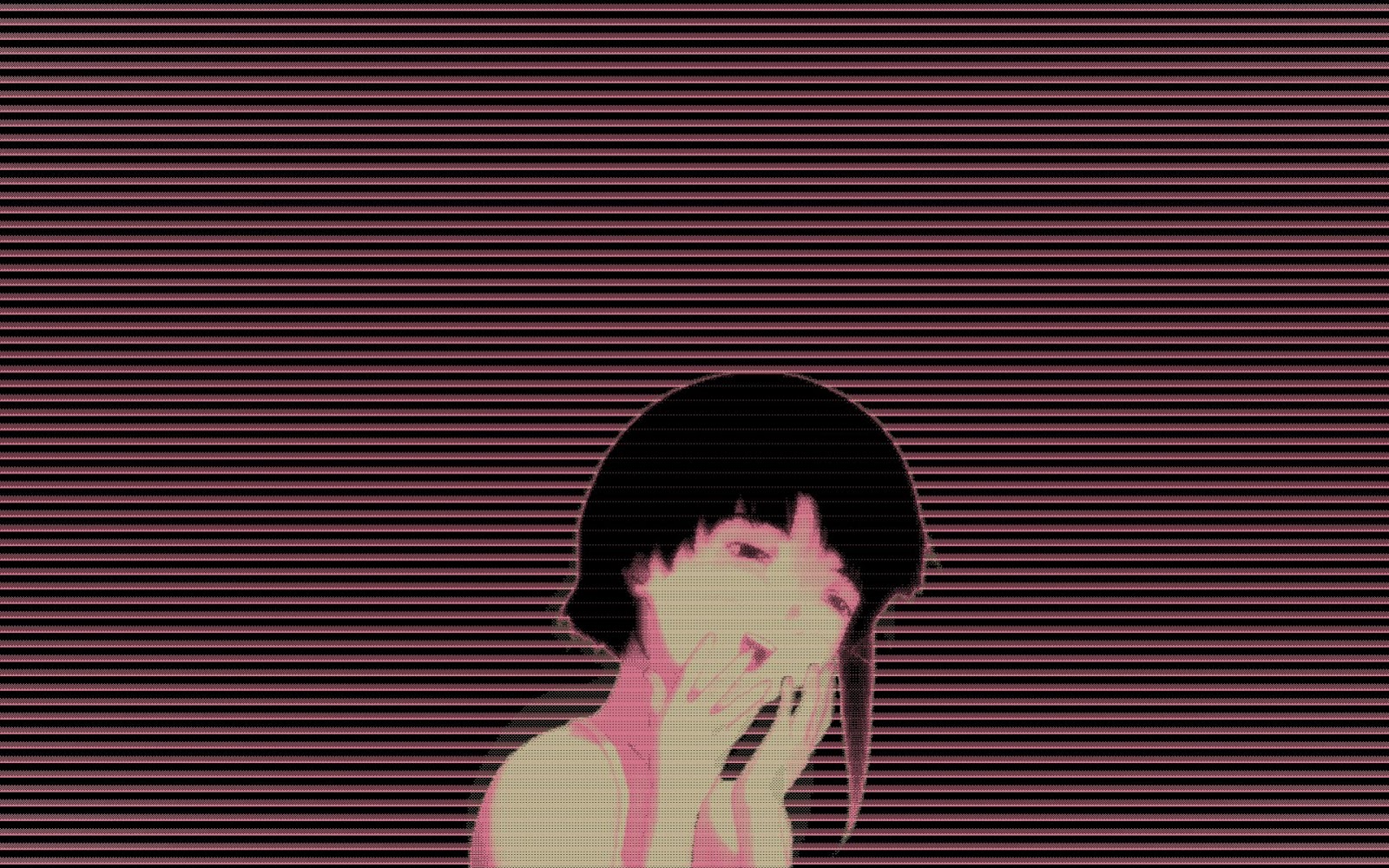 You might want to sit down for this one.

Now, there are a LOT of essays and videos on the internet that attempt to interpret every thematic underscoring within Lain.

But for the sake of time (both yours and mine), I’m going to focus on two that I find the most profound and prominent: ontology and identity.

The first, ontology, has to do with how the series constantly poses the question of what is or is not reality. Moreover, it delves into the concept of what exactly is reality.

For example, Lain is constantly questioning whether the events and people she encounters are “real” or in The Wired. Since the show constantly switches between both without any prior warning, we as viewers are often left wondering the same.

However, while many works of fiction have done this before, Lain takes it a bit further by asking what the importance of such a distinction even is.

Since the Internet is the primary source of informational exchange in modern time, and since so many people feel like they can be “themselves” while online, has the virtual world become more “real” than the physical world?

This type of question is introduced immediately in the show through Chisa’s suicide. She has come to believe that her physical body is unnecessary, since she can fully exist in The Wired. And since the show blends the two worlds so seamlessly, we’re tasked to meditate on this question throughout the entire series.

In short, the question remains: What distinguishes the virtual world from the physical? And, why should does it matter?

The second theme, identity, is a bit more loaded.

One thing the series touches on is how important one’s sense of identity is when compared to how others view us.

While we as the audience get a good sense of who Lain “really” is, other characters seem to have completely different perceptions of her as a result of interactions with her online persona. As a result, the varying personas of Lain across other people’s minds take on a life of their own, effectively resulting in multiple Lains.

This theme reminds me a lot of “The Phenomenology of Spirit” by Georg Hegel. One talking point of this book is how one’s existence can only be truly verified through the confirmation of another being. In short: you can only really know you exist if another person confirms it.

This ties into Lain because the other Lains are considered more real by those who encounter them than the actual Lain. It doesn’t really matter how well she knows herself if nobody else thinks the same, which would effectively make her the fake Lain. The concept of identity gets further developed when the show touches on memories.  Since the perception of reality is heavily dependent on memory, if you don’t remember someone, did they ever really exist?

I know this seems pretty confusing, but that’s only because the show can be confusing. But that’s the point. There’s no right answer to these questions, and the show does a great job of presenting them without trying to provide an answer. It’s great stuff.

This should go without saying, as I finished watching the series yesterday and am already writing a review on it.

Although it’s only 13 episodes, I have never watched an entire Anime series as fast as I watched Serial Experiments Lain. I was completely immersed from beginning to end, and surprisingly found the ambiguity of it all to be its best quality.

However, I will admit that this show isn’t for everyone. There’s not a lot of action, or even movement for that matter. It’s what you call a “thinking person’s show”, and I know that isn’t everyone’s cup of tea.

I’m almost glad that it’s taken me this long to watch Lain, as I don’t think I would have been able to fully appreciate it if I saw it while younger. It would be a huge understatement to say that I don’t appreciate it now.

I have never seen a show this old that has actually gotten more relevant over time. The themes are indeed timeless, but the setting of Lain is so eerily accurate to today that I was left in a contemplative trance after viewing it.

There’s a lot to gain from watching this show today, and at only 13 episodes, it’s an absolute crime to not at least give it a chance.

Again, it isn’t for everyone, and the ambiguity can be frustrating at times, but in terms of thought-provoking content, there’s very little to lose from watching this series.

Recommended shows if you enjoy Lain: