As you might have been obnoxiously notified by your Spotify account by now, Migos dropped the follow-up to last year’s groundbreaking Culture this past week.

So like everyone else, we took the time from our meager lives to give the album a listen.

And what we came away with was simmering disappointment at how this “sequel” was almost entirely antithetical to its predecessor.

But it’s one thing to give criticism that’s fueled by spur-of-the-moment opinions. We have this groovy website after all, so we decided to think about it a bit and really explain why Culture II was a letdown.

Culture was an excellent, 13-track effort that perfectly encapsulated the zeitgeist of (Black) Hip Hop culture upon the time of its release.

It had the allure and impact of a one-off classic, similar to Stankonia or Get Rich Or Die Tryin’.

Culture II should not have been titled as such.

I think even “Made Men” would have been a better title, since the album seems much more centered on the members themselves as opposed to an entire movement. This cover is excellent. It has a street sign pointing towards north Atlanta, each member is tastefully mixed in, and they even included the group’s quirky (& potentially offensive) affinity for Asian influences.

Culture II, on the other hand, just lazily slapped the 3 members of the group on it:

I think that should have been a big tip-off over how much effort went into each album.

It’s fitting that Quavo opens Culture II with the lines, “Beg and plead for the culture.”

I was hyped for Migos taking a victory lap for the culture.

Problem is, that this shit feels like a victory marathon. There are refreshing songs that give the album a burst of energy, but I walked away after the closer with a resounding, “Finally”.
-Marcos

Yeah, I don’t think that “laborious” should be a term to describe a listening experience, but trying to get through Culture II all at once is a test of outstanding resolve.

My barber told me the other day that he gave 3 entire haircuts with album playing in the background.

For those who don’t know, it takes at least 30 minutes to give a proper haircut….if you’re a minority.

With a runtime of 1 hour and 46 minutes across 24 songs, you could finish the movie Reservoir Dogs faster than you can finish this album.

For a record label called Quality Control, they did very little to exhibit any.
-Shayne

The Good Songs Are Surrounded By Filler

I’m not saying there aren’t nuggets of excellence here – I’m still sifting through to find them like white kids looking for gold in Santa Cruz streams.

On first listen, the “album” (term used as loosely as Offset’s lyricism) started well. “Superstars”, “Narcos”, and “BBO” all go off.

The next couple are mostly forgettable. Only “Walk it Talk it” stands out because of its exceptionally repetitive hook. WALK IT LIKE I TALK IT (TALK IT.)

Then “Stir Fry” comes in to break up the generic trap sounds. DAMN FAM. Migos might have done something.

Aight maybe they have the ability to experiment. BUT…..

IT WASN’T MIGOS AT ALL. IT WAS PHARELL’S VAMPIRE ASS FEEDING OFF THE ENERGY IN POP MUSIC TO SUSTAIN HIS YOUTH. 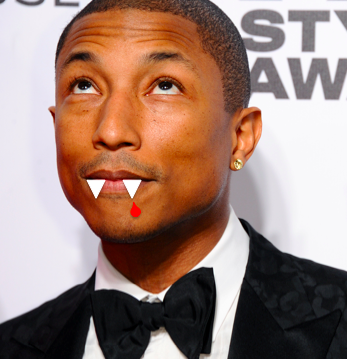 That’s where my, and the vast majority of peoples’, attention span falls off. On Spotify the first half of the album hovers around 10 million streams, and the second half falls down to the 3 million range (with the exception of features and singles).

Even “Made Men”, which is one of the standout tracks, suffers from this issue.

Part of me thinks that this front-loading was done deliberately, too. They wanted to get people amped off of the earlier gems, and hoped that anyone who was hooked in by “Narcos” or “Stir Fry” would stick around for the monotony of the middle, only to have their perseverance meagerly validated with “MotorSport” and “Made Men”.

It just makes me wonder why some of these tracks were even included at all.

Let’s look back to Culture. It has 13 tracks. And while not all of them are classics, most of them are unique in their own way and therefore have great playback potential.

Culture II has about as many quality tracks (which is still kind of a stretch), so why include all the filler?

And if you somehow think it’s unfair to compare Culture II to Culture: It’s a direct sequel, so shut the fuck up.

It’s hard to make an argument for the standout tracks because I like them for the same reason I don’t like others:

Migos follow a very clear formula that made them blow up.

Songs start with a Quavo hook and verse. Offset and Takeoff jump in with adlibs. Offset mixes in equal amounts of mediocre and exceptional verses. Takeoff elevates the songs even if he has only a minimal verse at the end.

Y’all get the idea?

This is the same formula that they followed when they were underground trap stars that put out 20+ song mixtapes with one or two standout tracks that Drake stole flows from. And to Marcos’ point, that formula is actually very appropriate for an up-and-coming artist. Most of them opt to throw whatever they can at the listener (hopefully a record exec) and pray that something, anything will stick.

It worked for Migos, obviously. Drake heard Versace on YRN, blessed the remix with his presence, and Migos were soon off to the races.

But that’s why Culture was so highly acclaimed. It was a airtight album that proved how good Migos actually could be when they’re focused. They had the fame already, so they took it as an opportunity to expand their sound.

And 13 tracks was just short enough to do so without getting boring.

Culture II is a regression to their old days, where most songs trudge along a predetermined formula until each member gets a verse. And as a supposed album, this got very boring, very quickly.

This is primarily why it was so disappointing to me. It was more of a haphazard mixtape than a concise, focused effort.

The Length Was To Game The Streaming System

There’s a lot of speculation that this was done to game the way the Recording Industry Association of America tracks streams as sales: 1500 track streams count as one album sale so large projects take less people listening to the whole thing to count towards Gold and Platinum Certification.

Both of these projects received the same amount of critical hate that bloated projects with little substance deserve.

To me, this signals a disturbingly growing trend in the industry.

Rae Sremmurd’s “SremmLife 3” has been announced as a 3-disk album.

Believe me: NOBODY wants that much Rae Sremm.

And while, we’re on the topic of rap sequels: “SremmLife 2” was a fantastic follow-up.

Know how many songs it had?

Anyway, expect artists to keep padding their stats and sacrificing their artistic integrity for streams and money.

Because that’s all that most of them care about anyway.

The hate Migos are getting for this song dump is over the top; but the truth remains that they need to give us more “Culture” if they want to keep their current star power and not return to being one trap ponies.

Marcos and I really struggled when we started this review. Its difficult to remark on something when it’s….relatively unremarkable. It wasn’t terrible by any means, but as my good friend (and chief Hip-Hop consultant) Chijioke told me: “It ain’t Culture I”.

It’s…ya know, okay. I consider this a “Treadmill Project”, in that it doesn’t take too many huge leaps forward or backwards. It’s kinda just there.

Anyone who says they genuinely liked this album from beginning to end is only saying so because they want to. By that, I mean they’re wearing rose-colored clout sunglasses and think every track that Migos shits out is pure gold.

Just because Migos have changed Hip-Hop over the course of their young careers doesn’t automatically mean that they continued to do so on Culture II.

It was a sloggly, tiresome album that drowned its notable tracks in a sea of mediocrity. Which is a real downer, because it detracts from the legacy of a modern classic.

And for funsies, here’s my proposed non-filler tracklist (and order) for Culture II: