I haven’t started a new manga in years. I committed to Naruto, One Piece, and Bleach with all the effort I should have put into romantic relationships. I was just too deep; I’d started on all of those series before I’d even realized that I was attracted to human beings that weren’t comic book characters.

When Naruto ended, I let out a sigh of relief. It had been a long journey with too many low points. It was an appropriate ending to a huge chapter of my life, but Kishimoto gave us some stupid adult ending the same way Rowling did. I almost gave up on manga altogether.

Then I heard about My Hero Academia (Boku no Hero Academia). It was consistently topping the Shonen Jump rankings, and I couldn’t resist. I read the first chapter and developed the strongest crush I’ve had on anyone since Claire from my first year of college.

The premise of the manga is simple enough: most everyone is born with a Quirk, or superpower. Society has developed into one where YOU can be a superhero, even if your Quirk is being a human frog.

Sounds like your childhood spent running around in tighty whities and a cape,right?

Because this is Shonen, there is obviously a catch.

The hero is Midoriya Izuku, one of the few people born without a Quirk. On top of that, he’s a goddamn nerd and a loser. Perfect underdog story in the making.

His hero, and everyone’s really, is All Might. This dude is the #1 Hero in the world, and the symbol of peace for Japan. He’s basically Superman, except he’s an American in Japan and all of his attacks are named after American places.

From here we find out that All Might’s power is fading. He was injured and needs a successor, and it just so happens that his Quirk, All for One, can be passed on. He takes Izuku under his wing and gives the Quirkless loser a chance to be the very best. There also happens to be a Hero Academy (it’s the title, no surprises here) that is renowned for producing all the best heroes.

The next clear step for Shonen is followed: Izuku makes it into the academy along with his rival who just so happens to be a complete dick (Naruto and Sasuke flashbacks).

I know what you’re thinking: so far this sounds just like any other Shonen. Once you meet the other students there’s even a perverted teen obsessed with peeping!

It’s so much more than that though.

My Hero Academia takes the Shonen recipe, uses all the pieces excellently, and then turns the storytelling up to a level that is rarely seen in Shonen. While the story follows a structure any Shonen fan has become familiar with, there’s a depth to characters that isn’t usually present. It’s a world that clearly sets up Heroes and Villains at the very start, but the villains get their screen time.

You learn why Stain wants to kill all the Heroes, and it’s based in his love for All Might as a true symbol of peace. He gets to explain that he’s not just a ruthless murderer, he has a purpose and a goal. He wants Japan’s heroes to return to being truly amazing and selfless. This puts him at odds with our heroes though, so conflict ensues. 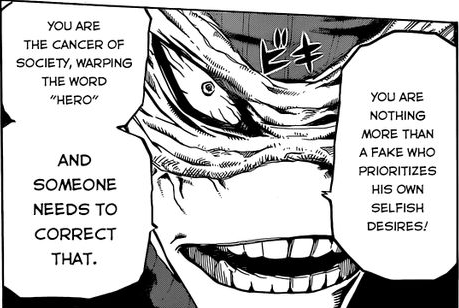 You meet the first major villain, One for All, as a foil to All Might. He is greedy and power hungry. He wants to control the world and destroy it at the same time. He gets to tell his side though. He speaks on the struggles he’s faced and defends his protege in the same way All Might would Izuku.

At the same time, you see the dark sides of the heroes. All Might is an angry man who will sacrifice everything to defeat All for One. The #2 hero seems more like a villain: he is hellbent on doing anything and everything to overtake All Might.The other hero instructors make mistakes and put their students at risk. The police start to question just how reliable their heroes are.

The manga might be about heroes and an underdog becoming great on a surface level, but it incorporates critiques on heroism and perspective of morality. It puts into question just how good super powered people above the law can be, and forces you to question the people you see as heroes or villains in your own life.

Everyone has a story, and sometimes all it takes is considering the other perspective to understand how a hero can also be a villain.

As a current educator of the youth, Marcos knows very well that heroes come in all forms.